Question 2.
In the table below, write the number of sides the polygon has.

Question 3.
Look for examples of polygons in your surroundings. Draw them.
Solution:

Question 4.
We see polygons when we join the tips of the petals of various flowers. Draw these polygons and write down the number of sides of each polygon.
Solution: 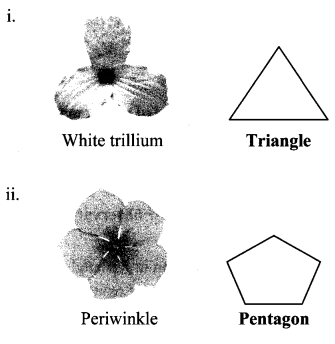 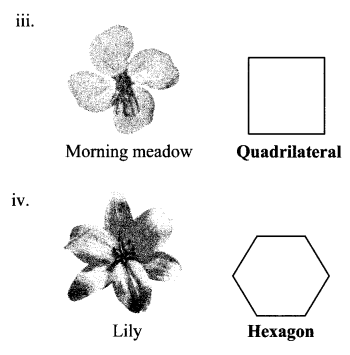 Question 5.
Draw any polygon and divide it into triangular parts as shown here. Thus work out the sum of the measures of the angles of the polygon. 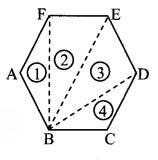 Question 2.
Kaprekar Number. (Textbook pg. no. 86)
i. Take any 4-digit number in which all the digits are not the same.
ii. Obtain a new 4-digit number by arranging the digits in descending order.
iii. Obtain another 4-digit number by arranging the digits of the new number in ascending order.
iv. Subtract the smaller of these two new numbers from the bigger number. The difference obtained will be a 4-digit number. If it is a 3-digit number, put a 0 in the thousands place. Repeat the above steps with the difference obtained as a result of the subtraction.
v. After some repetitions, you will get the number 6174. If you continue to repeat the same steps you will get the number 6174 every time. Let us begin with the number 8531.
8531 → 7173 → 6354 → 3087 → 8352 → 6174 → 6174
This discovery was made by the mathematician, Dattatreya Ramchandra Kaprekar. That is why the number 6174 was named the Kaprekar number.
Solution: