1. Select the most correct choice.

(2) While the disaccharide maltose is a reducing sugar because a free aldehyde group can be produced at C1 of second sugar molecule. It is a reducing sugar. It reduces Tollen’s reagent to shining silver mirror. Hence, Maltose gives positive Tollen’s test.

α-Amino acids have high melting points compared to the corresponding amines or carboxylic acids of comparable molecular mass due to the presence of both acidic (carboxylic group) and basic (amino group) groups in the same molecule. In aqueous solution, proton transfer from acidic group to amino (basic) group of amino acid forms a salt, which is a dipolar ion called zwitter ion.

(2) DNA molecule : 5′ – CCGGTTAATACGGC – 3′
The complementary strand runs in opposite direction from the 3′ end to the 5′ end. It has the base sequence decided by complementary base pairs A – T and C – G.

(2) Dipeptide formed from alanine and tyrosine

(3) Dipeptide formed from glycine and tyrosine.

4. Draw a neat diagram for the following: 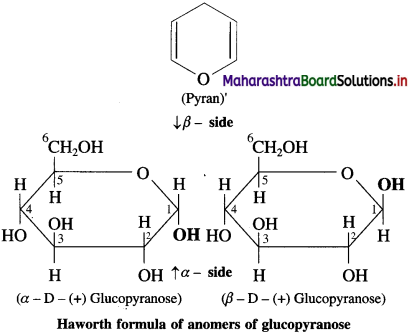 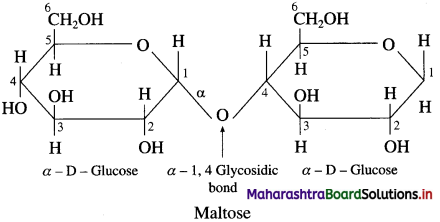 (b) Representation with amino acid symbols

α-Helix : In a-helix structure, a polypeptide chain gets coiled by twisting into a right handed or clαkwise spiral known as a-helixn. The characteristic features of α-helical structure of protein are : (1) Each turn of the helix has 3.6 amino acids.
(2) A C = O group of one amino acid is hydrogen bonded to N – H group of the fourth amino acid along the chain.
(3) Hydrogen bonds are parallel to the axis of helix while R groups extend outward from the helix core.
Myosin in muscle and a-keratin in hair are proteins with almost entire a-helical secondary structure. The β-pleated sheet arrangement is favoured by amino acids with small R groups. The three-dimensional shape acquired by the entire polypeptide chain of a protein is called its tertiary structure. The structure is stabilized and has attractive interaction with the aqueous environment of the cell due to the folding of the chain in a particular manner. Tertiary structure gives rise to two major molecular shapes i.e. globular and fibrous proteins. The main forces which stabilize a particular tertiary structure include hydrogen bonding, dipole-dipole attraction (due to polar bonds in the side chains), electrostatic attraction (due to the ionic groups like -COO–, \(\mathrm{NH}_{3}^{+}\) in the side chain) and also London dispersion forces. Finally, disulfide bonds formed by oxidation of nearby – SH groups (in cysteine residues) are the covalent bonds which stabilize the tertiary structure. 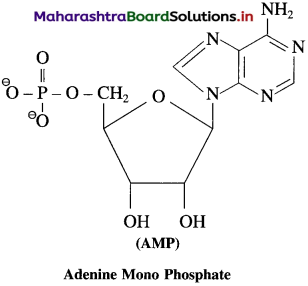 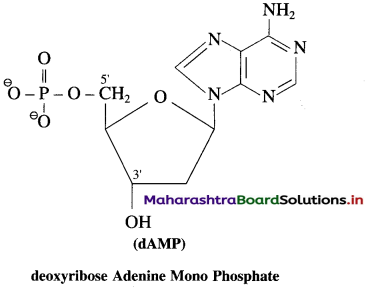 Question vii.
One purine base from nucleic acid
Answer: 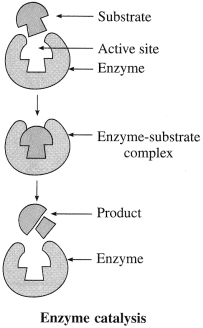 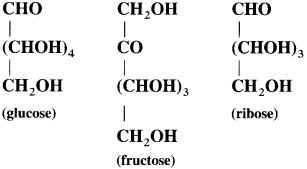 Use your brain power! (Textbook Page No 299)

Question 1.
Give IUPAC names to the following monosaccharides.

Use your brain power! (Textbook Page No 301) 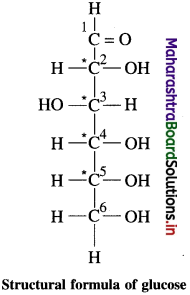 (4) There are 4 chiral carbon atoms present in glucose.

Use your brain power! (Textbook Page No 306)

Question 1.
(1) Is galactose an aldohexose or a ketohexose?
(2) Which carbon in galactose has different configuration compared to glucose?
(3) Draw Haworth formulae of α-D-galactose and β-D-galactose.
(4) Which disaccharides among sucrose, maltose and lactose is/are expected to give positive Fehling test?
(5) What are the expected products of hydrolysis of lactose?
Answer:

Question 1.
When you chew plain bread, chapati or bhaakari for long time, it tastes sweet. What could be the reason?
Answer:
When chapati, bread or bhakari are chewed for long time the pulp mixes with saliva and carbohydrate component in them diseminates and gives the sweet taste.

Use your brain power! (Textbook Page No 309)

Question 1.
Tryptophan and histidine have the structures (I) and (II) respectively. Classify them into neutral? acidic/basic &amino acids and justify your answer. (Hint: Consider învolvement of lone pair in resonance).

Question 1.
Compare the molecular masses of the following compounds and explain the observed melting points.

Answer:
Above compounds have same molecular masses but they have different melting points, a-amino acids have higher melting points compared to the corresponding amines or carboxylic acids of comparable masses. This property is due to the presence of both carboxylic group (acidic) and amino group (basic) in the molecule. In aqueous solution, protons transfer from acidic group to amino (basic) group of amino acid forms a salt, which is a dipolar ion called – Zwitter ion.

Use your brain power! (Textbook Page No 310)

Question 1.
(1) Write the structural formula of dipeptide formed by combination of carboxyl group of alanine and amino group of glycine.
(2) Name the resulting dipeptide.
(3) Is this dipeptide same as glycyalanine or its structural isomer?
Answer:

Question 54.
Write the names and schematic representations of all the possible dipeptides formed from alanine, glycine and tyrosine.

Question 1.
Chymotrypsin is a digestive enzyme that hydrolyzes those amide bonds for which the carbonyl group comes from phenylalanine, tyrosine or tryptophan. Write the symbols of the amino acids and peptides smaller than pentapeptide formed by hydrolysis of the following hexapeptide with chymotrypsin. Gly-Tyr-Gly-Ala-Phe-Val
Solution :
In the given hexapeptide hydroylsis by chymotripsin can take place at two points, namely, Phe and Tyr. The carbonyl group of these residues is towards the right side, that is, toward the C-terminal. Therefore the hydrolysis products in required range will be :

Question 1.
Write down the structures of amino acids constituting the following peptide.

Solution :
The given peptide has two amide bonds linking three amino acids. The structures of these amino acids are obtained by adding one H2O molecule across the amide bond as follows :

Use your brain power! (Textbook Page No 313)

A protein chain has the following amino acid residues. Show and label the interactions that can be present in various pairs from these giving rise to tertiary level structure of protein.

Question 1.
What is the physical change observed when (a) egg is boiled, (b) milk gets curdled on adding lemon juice?
Answer:
(a) When egg is boiled, coagulation of eggwhite (insoluble fibrous proteins) takes place. This is a common example of denaturation.
(b) When lemon juice is added to milk, it gets curdled due to the formation of lactic acid. This is another example of denaturation.

Use your brain power! (Textbook Page No 317)

Solution :
D/L configuration is assigned to Fischer projection formula of monosaccharide on the basis of the lowest chiral carbon.

Threose has two chiral carbons C-2 and C-3. The given Fischer projection formula of threose has OH groups at the lowest C -3 chiral carbon on the right side.
∴ It is D-threose. 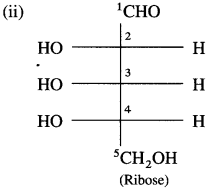 Ribose has three chiral carbons C – 2, C – 3 and C -4.
The given Fischer projection formula of ribose has – OH group at the lowest C -4 chiral carbon on the left side.
∴ It is L-ribose