Maharashtra Board Class 12 Chemistry Solutions Chapter 7 Elements of Groups 16, 17 and 18

1. Select appropriate answers for the following.

Question i.
Which of the following has the highest electron gain enthalpy?
A. Fluorine
B. Chlorine
C. Bromine
D. Iodine
Answer:
B. Chlorine

Question iii.
Which of the following element does not show oxidation state of +4 ?
A. O
B. S
C. Se
D. Te
Answer:
A. O

Question xi.
In interhalogen compounds, which of the following halogens is never the central atom.
A. I
B. Cl
C. Br
D. F
Answer:
D. F

Question xiii.
In which of the following pairs, molecules are paired with their correct shapes?
A. [I3] : bent
B. BrF5 : trigonal bipyramid
C. ClF3 : trigonal planar
D. [BrF4] : square planar
Answer:
A. [I3] : bent

Question iv.
Give two uses of ClO2
Answer:
(i) ClO2 is used as a bleaching agent for paper pulp and textiles.
(ii) It is also used in water treatment.

Question x.
Write the reaction of conc. H2SO4 with sugar.
Answer:
Concentrated sulphuric acid when added to sugar, it is dehydrated giving carbon.

The carbon that is left behind is called sugar charcoal and the process is called char.

Question xi.
Give two uses of chlorine.
Answer:
Chlorine is used for :

Question xiv.
What is the oxidation state of xenon in the following compounds?
XeOF4, XeO3, XeF5, XeF4, XeF2.
Answer:

Question i.
The first ionisation enthalpies of S, Cl and Ar are 1000, 1256 and 1520 kJ/mol-1, respectively. Explain the observed trend.
Answer:
(i) The atomic number increases as, 16S < 17Cl < 18Ar1.
(ii) Due to decrease in atomic size and increase in effective nuclear charge, Cl binds valence electrons strongly.
(iii) Hence ionisation enthalpy of Cl (1256 kJ mol-1) is higher than that of S(1000 kJ mol-1)
(iv) Ar has electronic configuration 3s23p6. Since all electrons are paired and the octet is complete, it has the highest ionisation enthalpy, (1520 kJ mol-1)

Question iii.
How is dioxygen prepared in laboratory from KClO3?
Answer:
By heating chlorates, nitrates and permanganates.
Potassium chlorate in the presence of manganese dioxide on heating decomposes to form potassium chloride and oxygen. 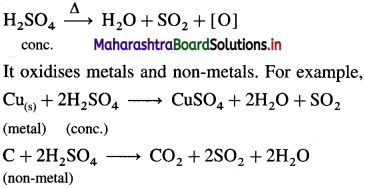 Question vi.
Discuss the structure of sulfur dioxide.
Answer:
(i) SO2 molecule has a bent V shaped structure with S-O-S bond angle 119.5° and bond dissoClation enthalpy is 297 kJ mol-1.
(ii) Sulphur in SO2 is sp2 hybridised forming three hybrid orbitals. Due to lone pair electrons, bond angle is reduced from 120° to 119.5°.
(iii) In SO2, each oxygen atom is bonded to sulphur by σ and a π bond.
(iv) a bond between S and O are formed by sp2-p overlapping.
(v) One of π bonds is formed by pπ – pπ overlapping while other n bond is formed by pπ – dπ overlap.
(vi) Due to resonance both the bonds are identical having observed bond length 143 pm due to resonance, 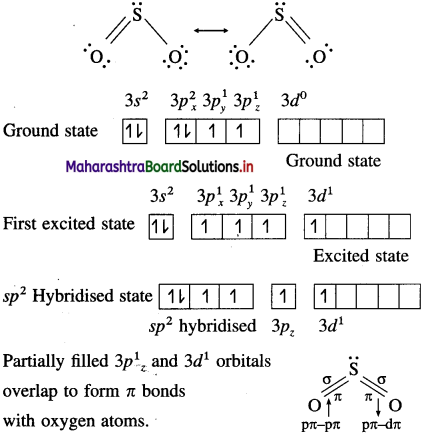 Question viii.
What is the action of chlorine on the following
a. Fe
b. Excess of NH3
Answer:
(a) Chlorine reacts with Fe to give ferric chloride.
2Fe + 3Cl2 → 2FeCl3

(b) Chlorine reacts with the excess of ammonia to form ammonium chloride, NH4Cl and nitrogen. Question xii.
What is the action of hydrochloric acid on the following?
a. NH3
b. Na2CO3
Answer:
a. Hydrochloric acid reacts with ammonia to give white fumes of ammonium chloride.
NH3 + HCl → NH4Cl

Question xiv.
Write the names and structural formulae of oxoacids of chlorine.
Answer: 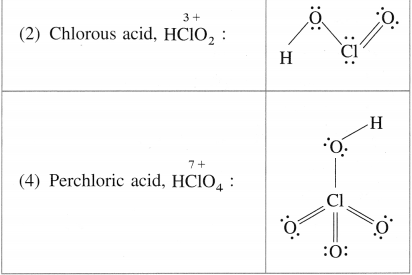 (b) Br2 reacts with excess of F2 to give bromine trifluoride BF3.

Question xvi.
How are xenon fluorides XeF2, XeF4 and XeF6 obtained ? Give suitable reactions.
Answer:
Xenon fluorides are generally prepared by the direct reaction of xenon and fluorine in different ratios and under appropriate experimental conditions, such as temperature, in the presence of an electric discharge and by a photochemical reaction.
(i) Preparation of XeF2 :

Question xvii.
How are XeO3 and XeOF4 prepared?
Answer:
Preparation of XeO3 : Xenon trioxide (XeO3) is prepared by the hydrolysis of XeF4 or XeF6.

Question xix.
Describe the structure of Ozone. Give two uses of ozone.
Answer:
(A)

Question i.
Distinguish between rhombic sulfur and monoclinic sulfur.
Answer:

Question iii.
How is SO2 prepared in the laboratory from sodium sulfite? Give two physical properties of SO2.
Answer:
(A) Laboratory method (From sulphite) :

(B) Physical properties of SO2

(1) Preparation of SO2 : Sulphur or pyrite ores like iron pyrites, FeS2 on burning in excess of air, form SO2.

(2) Oxidation of SO2 to SO3 : SO2 is oxidised to SO3 in the presence of a heterogeneous catalyst V2O5 and atmospheric oxygen. This oxidation reaction is reversible.

To avoid the poisoning of a costly catalyst, it is necessary to make SO2 free from the impurities like dust, moisture, As2O3 poison, etc.

(3) Dissolution of SO3 : SO3 obtained from catalytic converter is absorbed in 98%. H2SO4 to obtain H2S2O7, oleum or fuming sulphuric acid.

Flow diagram for the manufacture of sulphuric acid

Question 1.
Elements of group 16 generally show lower values of first ionisation enthalpy compared to the elements of corresponding period of group 15. Why?
Answer:
Group 15 elements have extra stable, half filled p-orbitals with electronic configuration (ns2np3). Therefore more amount of energy is required to remove an electron compared to that of the partially filled orbitals (ns2np4) of group 16 elements of the corresponding period.

Question 1.
The values of first ionisation enthalpy of S and Cl are 1000 and 1256 kJ mol-1, respectively. Explain the observed trend.
Answer :
The elements S and Cl belong to second period of the periodic table.
Across a period effective nuclear charge increases and atomic size decreases with increase in atomic number. Therefore the energy required for the removal of electron from the valence shell (I.E.) increases in the order S < Cl.

Question 1.
Explain the trend in the following properties of group 17 elements.

Question 1.
Why is there a large difference between the melting and boiling points of oxygen and sulphur?
Answer :
Oxygen exists as diatomic molecule (O2) whereas sulphur exists as polyatomic molecule (S8). The van der Waals forces of attraction between O2 molecules are relatively weak owing to their much smaller size. The large van der Waals attractive forces in the S8 molecules are due to large molecular size. Therefore oxygen has low m.p. and b.p. as compared to sulphur.

Question 1.
Bond dissoClation enthalpy of F2 (158.8 kj mol-1) is lower than that of Cl2 (242.6 kj mol-1) Why?
Answer :
Fluorine has small atomic size than chlorine. The lone pairs on each F atom in F2 molecule are so close together that they strongly repel each other, and make the F – F bond weak. Thus, it requires less amount of energy to break the F – F bond. In Cl2 molecule the lone pairs on each Cl atom are at a larger distance and the repulsion is less.

Thus Cl – Cl bond is comparatively stronger. Therefore bond dissoClation enthalpy of F2 is lower than that of Cl2. 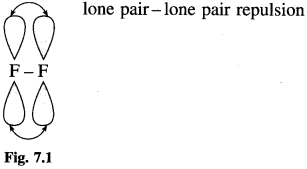 Use your brain power! (Textbook Page No 142)

Question 1.
Oxygen forms only OF2 with fluorine while sulphur forms SF6. Explain. Why?
Answer:

Question 3.
Show hydrogen bonding in the above molecule with the help of a diagram.
Answer: Question 1.
What is allotropy?
Answer:
The property of some elements to exist in two or more different forms in the same physical state is called allotropy.

Question 2.
What is the difference between allotropy and polymorphism?
Answer:

Which form of sulphur shows paramagnetic behaviour?
Answer :
In the vapour state, sulphur partly exists as S2 molecule, which has two unpaired electrons in the antibonding π* orbitals like O2. Hence it exhibits paramagnetism.

Question 1.
Why water in a fish pot needs to be changed from time to time?
Answer:
A fish pot is an artificial ecosystem and the fish in it are selective and maintained in a restricted environment.

In a fish pot, the unwanted food and waste generated by the fish mix with the water and remain untreated due to lack of decomposers.

Accumulation of waste material will decrease the levels of dissolved oxygen in the water pot.

Hence, it is necessary to change the water from time to time.

Dioxygen is paramagnetic in spite of having an even number of electrons. Explain.
Answer :
Dioxygen is a covalently bonded molecule.
The paramagnetic behaviour of O2 can be explained with the help of molecular orbital theory.
Electronic configuration O2
KK σ(2s)2 σ(2s)2 σ*(2pz)2 π(2px)2 π(2px)2 π(2py)2 π*(2px)1 π*(2py)1. Presence of two unpaired electrons in antibonding orbitals explains paramagnetic nature of dioxygen.

(a) Ozone is used as a bleaching agent. Explain.
Answer:

What is the action of concentrated H2SO4 on (a) HBr (b) HI
Answer :
Concentrated sulphuric acid oxidises hydrobromic acid to bromine.

Question 1.
Give the reasons for the bleaching action of chlorine.
Answer:

Use your brain power! (Textbook Page No 157)

Question 1.
Chlorine and fluorine combine to form interhalogen compounds. The halide ion will be of chlorine or fluorine?
Answer:
Among the- two halogens, chlorine is more electropositive than fluorine (Electronegativity values: F = 4.0, Cl = 3.2)

Use your brain power! (Textbook Page No 158)

Question 1.
What will be the names of the following compounds: ICl, BrF?
Answer:
ICl : Iodine monochloride
BrF : Bromine monofluoride

Use your brain power! (Textbook Page No 159)

Question 1.
In the special reaction for ICl, identify the oxidant and the reductant? Denote oxidation states of the species.
Answer:

Potassium chlorate, KClO3 is the oxidising agent or oxidant and iodine is the reducing agent or reductant.

Use your brain power! (Textbook Page No 162)

Question 1.
What are missing entries?